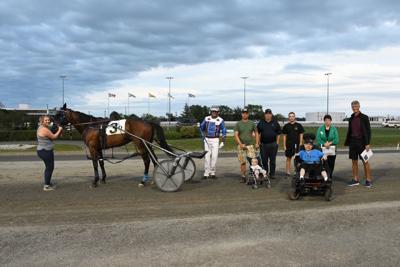 Ever since her arrival here on Prince Edward Island, the classy race mare Drivingthedragon N has brought smiles to the MacRae family of Vernon Bridge and two of her biggest supporters were Don’s son Steven and Melissa MacRae who is married to Don’s son Bryan. Qualified at two and ready to go on with, Drivingthedragon’s owners gave her plenty of time off before selling her to Don MacRae of Vernon Bridge, PEI in November 2014. Bred in New Zealand by Alabar Stud Farm, Drivingthedragon N is by Sutter Hanover, a son of Dragon Again, the sire of one of the greatest race- horses of all-time in Foiled Again. Drivingthedragon N surfaced in North America at Mohawk Raceway, April, 2015 in a qualifier at the Ontario track. She won her Mohawk debut in 1:53:3 beating a tough $20,000 conditioned class and then raced all over Ontario at Mohawk Raceway, Flamboro, Grand River and Georgian Downs earning in the vicinity of $60,000 and taking a record of 1:52:3 for driver Jonathan Drury.

The next spring, Drivingthedragon shipped to Yonkers, New York winning over the half-mile track in 1:53:2 before shipping to Prince Edward Island and the Open Mares Maritime circuit. Handled here in the Maritimes by Jason Hughes who has the MacRae horses, Drivingthedragon won five in a row including the $15,716 Atlantic Breeders Crown Open Mares over the top Maritime bred Ramblinglily. She finished off her campaign winning three of four losing her finale to Forever Paradise. She finished with nine victories in 17 Maritime starts while racing horses like DGs Camme, Big Surf and Eagle Jolt, a big jump up from the Open Mares.

When racing came to a close at Charlottetown, Drivingthedragon shipped back to Ontario under the care of Richard Moreau winning in 1:55 in March for Louie Philippe Roy before moving to Pocono winning in late June. The mare landed back at Red Shores Charlottetown with numerous ailments but she was nursed by to health thanks to the tender loving care of Melissa, Bryan and Jason Hughes at Red Shores Charlottetown. The MacRae family looked forward to the day when Driningthedragon would enjoy her retirement days on the beautiful farm overlooking Orwell Bay about 25 minutes from Red Shores Charlottetown. As well and even more important, they were looking forward to a day when she and her babies would enjoy a new career as a mommy. She was not the only one that felt that way because by now, the MacRae family had fallen deeply in love with the mare. After a holiday, she was back to the races and qualified in November reeling off three wins in a row to end the 2017 campaign.

From January - May, the New Zealand bred daughter of Sutter Hanover raced in Ontario under the care of talented Robert Shepherd mostly on the Western Fair- Flamboro half-mile track circuit and she showed she loved the twice around ovals beating the tough $8500 top class for mares. By the end of June, Drivingthedragon returned home to PEI and another rest as her racing career gradually drew to a close.. The racing on Prince Edward Island especially the Open Mares class was tough with the likes of Sodwana Bay, Ramblinglily, West River Ambyr and Traces of Purple among others.

She had a rest from January-May, 2019 and at that time, owner Don had thought about breeding her but decided to race her throughout the year and then call it a career. She won her CDP debut for catch-driver Mark Bradley, and battled the likes of Sodwana Bay, Innocent Kiss, Ramblinglily, Jordies Hope and Woodmere Chella throughout the summer winning the Open Mares at Truro Raceway during that track’s Grand circuit week in July.

Undoubtedly Drivingthedragon’s biggest fan was Steven MacRae, Don’s son, who has been a major part of the MacRae harness racing operation. Steven has enjoyed winning the Governors’ Plate with Do Over Hanover and competing in the Gold Cup and Saucer with Go Daddy Go and winning numerous races at USA tracks with his dad’s horses. Confined to a wheelchair, Steven travelled everywhere with the horses and when not on the road was home researching possible purchases for his dad. Naturally, Drivingthedragon was on his mind as well. Unfortunately, Steven passed away on June, 2019 – a terrible blow for the family and for Island harness racing.

It is always nice to showcase a potential broodmare by winning in August in Charlottetown and Drivingthedragon did just that winning out of the six hole in 2:00:1. She again piled up seconds and thirds before ending the 2019 campaign by winning in 1:59 at Charlottetown on Boxing Day, quite an achievement for a 10 year old soon to be 11 over a half-mile track in less than ideal conditions. Her summary for the season 32 starts 4-7-6, $12,696.

Thoughts of who to breed the New Zealand bred daughter of Sutter Hanover (Dragon Again) to likely occupied much of the MacRae family’s time. There’s lots to like about Drivingthedragon as a broodmare as she is by Sutter Hanover, a son of Dragon Again from a mare whose maternal family traces back to The Old Maid, one of the great foundation mares in North America breeding. Drivingthedragon finished her career with earnings in excess of $204,000 with a fast record of 1:52:2 and change. She was a multiple winner over half-mile tracks in Ontario and New York, and her offspring would likely be capable performers over a half-mile track where all the major stake races in Atlantic Canada are contested.

Drivingthedragon N was slated to make her last start on Saturday, January 18,2020 and it was a day that all horse fans especially the MacRaes will remember. Hustling into the first turn, the mare made a break and went onto the run but was quickly pulled up. She had suffered a serious break and all efforts to save her as a broodmare evaporated as the injury was just too serious. Rather than have her suffer, she was humanely put to sleep, ending the hopes and dreams of Island race fans and the MacRae family where she was part of the family.

Don MacRae and his family have many other horses but I doubt any will touch the heart more than Drivingthedragon N, the mare from New Zealand.