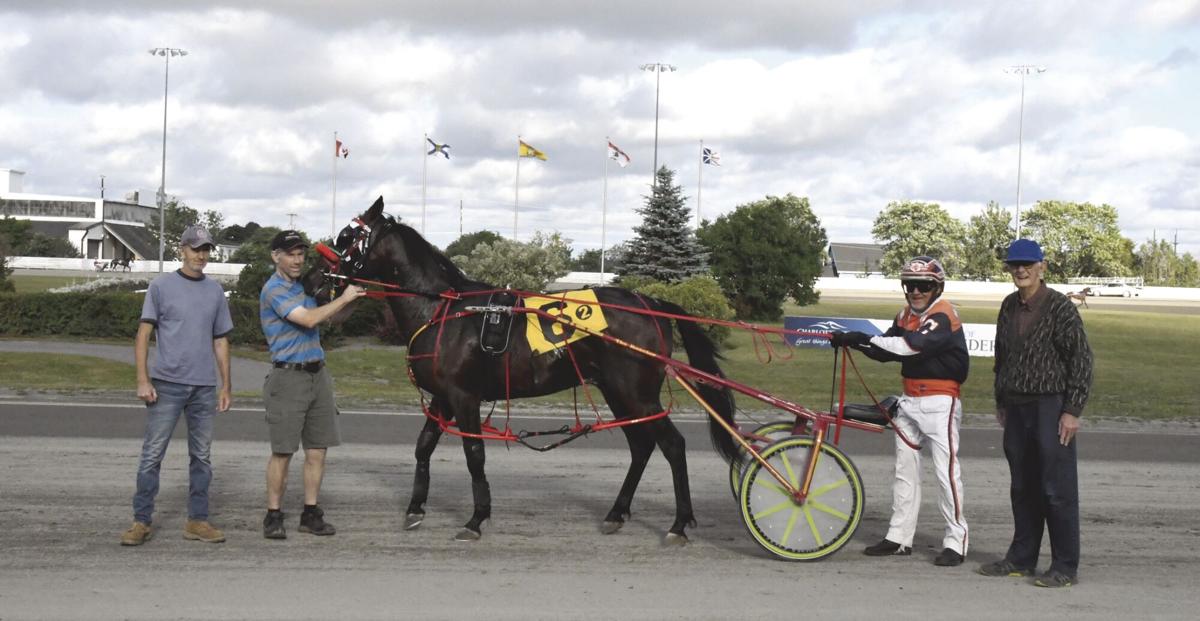 Walter Cheverie is all smiles after Justcallmedoc’s  1:59.3 victory recently in Charlottetown. Also in the photo Gordon Neill (far right) and Douglas and David Neill holding the horse. 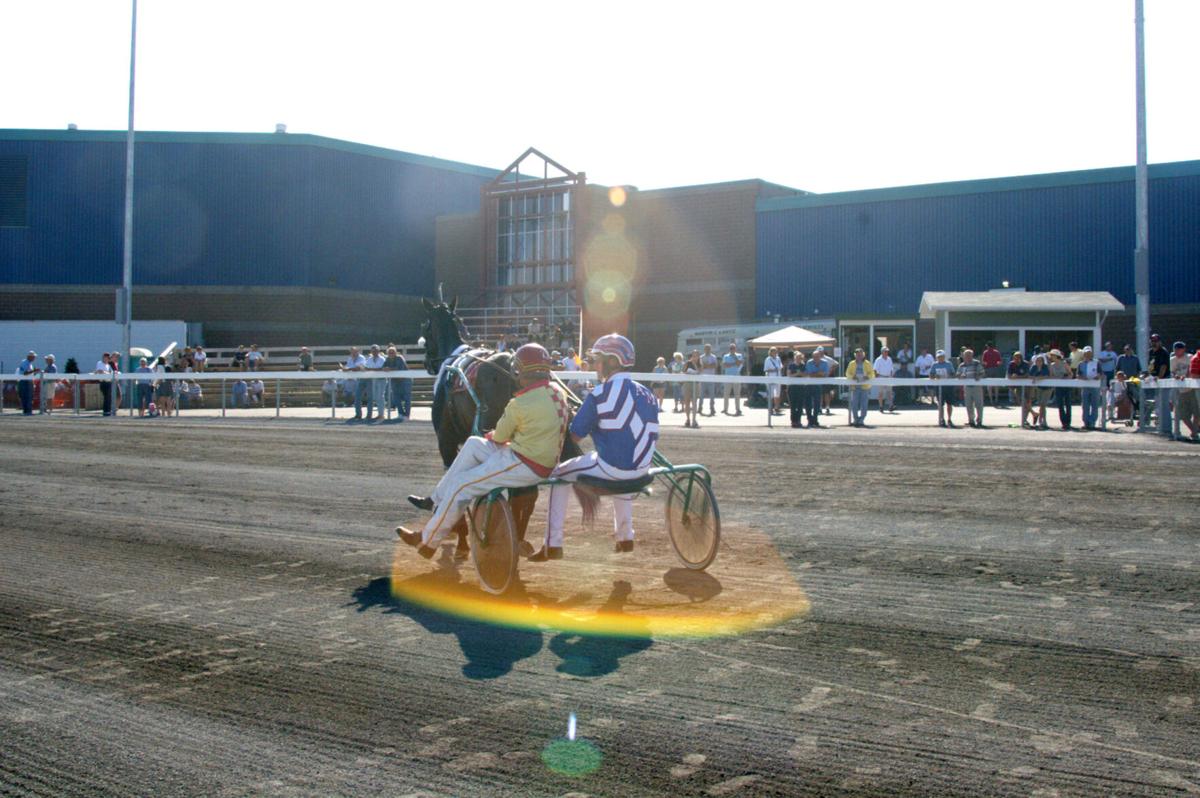 Walter Cheverie is all smiles after Justcallmedoc’s  1:59.3 victory recently in Charlottetown. Also in the photo Gordon Neill (far right) and Douglas and David Neill holding the horse.

It’s been a long, long time since the Neill name has appeared in the Atlantic Sire stakes trail with a real contender but according to Neill elder statesman Gordon and sons David and Douglas, the wait has been worth it. In fact, before the Atlantic Sires stakes started in 1967, Lem Neill often won top trot events here in Charlottetown with the reliable Belinki. Lem’s son Darryl campaigns three or four overnight horses for as long as I can remember and it was Lem that brought his brother Joe into the race game as well as Joe’s son Gordon who could often been found in the Wendell Ford Stable at the Charlottetown Driving Park.

Gordon and Wendell raced many horses over the years and race fans will likely remember names like Bookaboom, Quick Lick, On the Move Again, Crossridge Income, Move Over Paris and Run for the Top, not stakes winners or top class horses just horses that make up the bulk of the cards at race tracks across North America. They toil in relative obscurity ever night but with guys like the late Wendell Ford, Gordon Neill and his sons David and Douglas, they keep racing horses and attending sales hoping that this next horse will be that stakes star or top class horse that they’ve been waiting for.

When Wendell Ford passed away suddenly in 2007, his son Keith, aka Bim, took over his dad’s partnership with Gordon and sons David and Douglas and in time bred one of their mares MD Casey’s Charm to Steelhead Hanover, a royally bred son of super sire Bettors Delight who was brought to the Maritimes by Meridian Farms in 2017. Bettors Delight is one of the great sires in the world of harness racing throwing out great standouts like Tall Dark Stranger p, 1:47:1 and Bettors Wish p,1:48, two of the great pacers on the planet right now.

Steelhead Hanover colts and fillies have dominated the Atlantic Sire Stakes thus far in 2020 with freshman standout stakes star Woodmere Stealdeal p, 1:55:4h, Steel Reefer p, 1:58:1h,Dusty Lane Goliath p, 1:59h and Atlantic Sire stakes winning fillies like Maggies Delight p, 1;59:3h, Woodmere Stella p, 2:00:2 to name a few. Steelhead Hanover passed away unexpectedly a year ago and as is often the case when a new stallion suddenly is taken from us or a broodmare dies, the resulting foal (s) more often turns into something special. And let’s face it, Steelhead Hanover colts and fillies are special.

The Neill family knows all about patience and their hopes lifted somewhat this Spring when Justcallmedoc the colt that they bred and raced showed great promise for trainer Keith Ford. Towards the end of July, Justcallmedoc started to come into his own and looked like he was going to break into the win column at Charlottetown but couldn’t clear at the head of the stretch and finished 3rd setting the stage for his August 1st start. When Ford landed at outpatients and would miss the Saturday night start, the co-owners Ford, Gordon Neill and sons Doug and David called upon Walter Cheverie, one of the premier catch-drivers in Atlantic Canada.

Facing a group of two year olds in an $1800 race at the CDP, Cheverie was on the move at the half with Justcallmedoc as Big Bad Bruiser (David Dowling) cruised to the half in 1:01 and change. “Doc” was 2nd on the rim past the third marker but still with some pace and when Cheverie asked him for more in the stretch, he responded with a 27:4 closer to get to the wire first in 1:59:3. It was a new life best for the pacer who next encountered stakes action at Summerside Raceway on Sunday, August 9th.

The Callbeck Stakes for two year old colts went on Sunday afternoon and four divisions went behind the starting gate @ $7500 with Justcallmedoc in the 12th and final dash on this hot afternoon. Steel Reefer (Gilles Barrieau) won the first split in 1:58:2 for co-owners Wayne MacRae of Nova Scotia and Robbie Tilley and Gary Mott giving sire Steelhead Hanover another stakes win. The second division went to Saltwater Savage (Mark Bradley) in 1:56:2 as the son of State Treasurer won easily for co-owners Mike Currie, Kyle Gardner and Jerry MacKinnon of St Peters; in the third division Woodmere Steeldeal went wire to wire in 1:55:2 for driver Marc Campbell and co-owners Kevin Dorey and Robert Sumarah of Halifax setting a new SRW track record for two year old pacing colts. The son of super sire Steelhead Hanover also established a new Maritime record for two year old colts in this region breaking the old record of 1:56 set by Sock It Away a few years ago.

The Neill group were in pins and needles when the division four starters went behind the gate and to complicate matters driver Walter Cheverie was injured training a colt and Marc Campbell was called to substitute, a great driver but he had never sat behind the colt before. Campbell sat near the back in the six horse field and was out and moving at the half finishing a close 4th beaten two lengths by winner Mr Rielly (Cory MacPherson) in 1:58:2 for co-owners Darlene Compton, James Gorman and Kerry Taylor. The winner is by the ill-fated Steelhead Hanover who stood at Meridian Farms.

Justcallmedoc was charted in 1:58:4 and hustled home in 28:1, an indication that a new record could be in the works for OLD Home Week. In the meantime, the Neills and Bim Ford are enjoying the limelight and the fun they are heaving with their homebred colt, that’s what it’s all about.