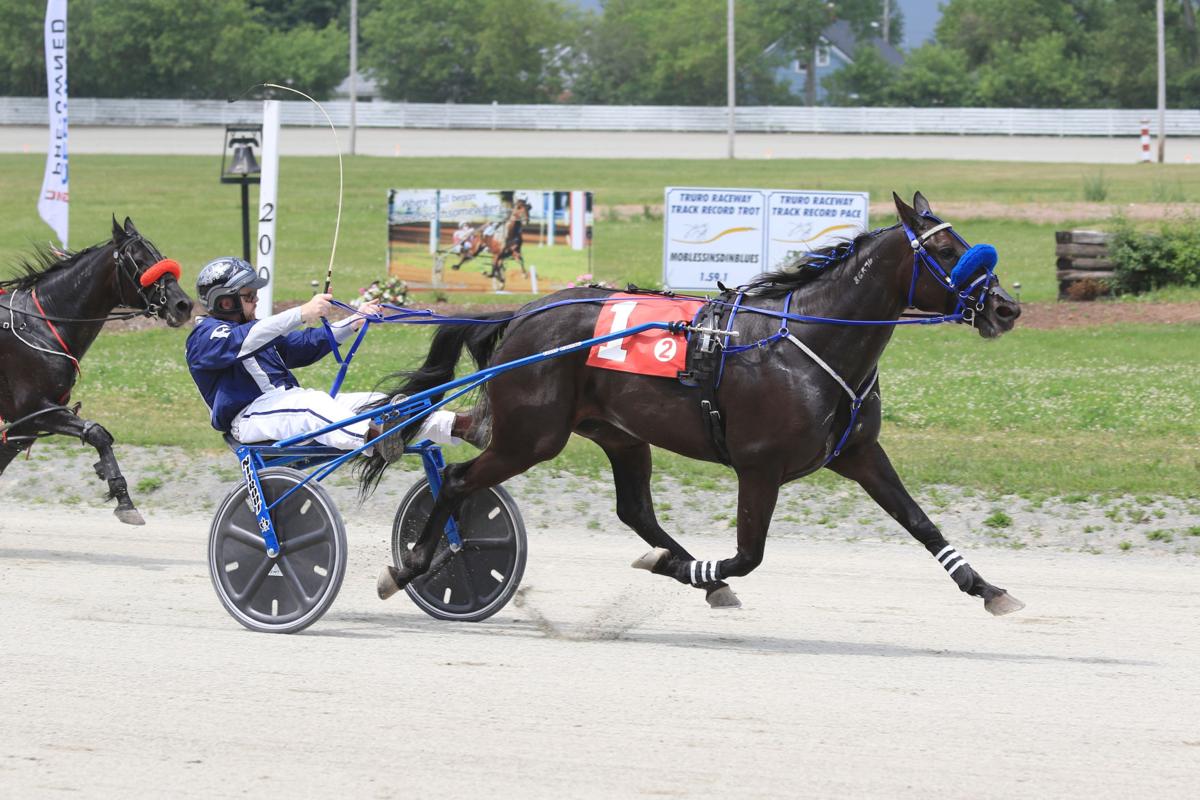 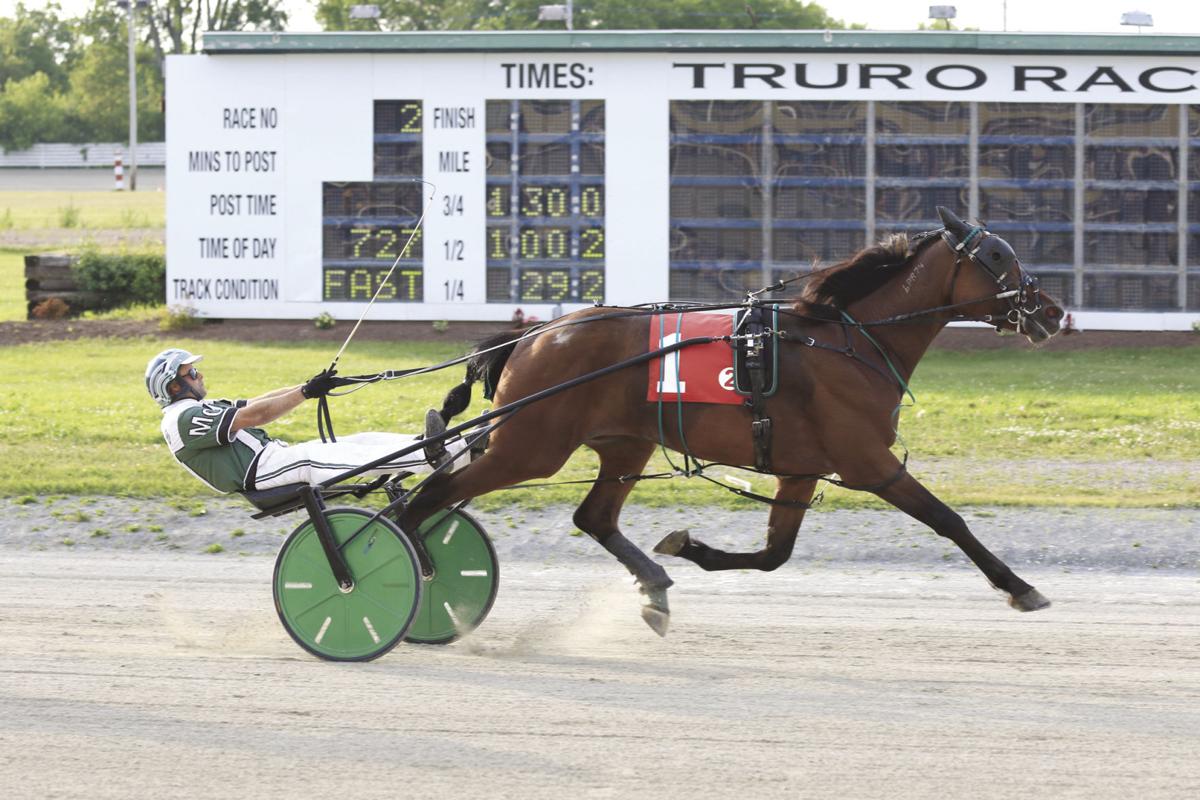 Well folks... history was made tonight (July 20th) at Truro Raceway with a new track record! Marc Campbell left from post four with Rose Run Quest and he cruised smoothly in 26.4, he went over the half in 55.1... the 3/4 went in 1:23.3 & he stopped the clock in 1:52.1 in an all new aged pacing track record. Wow indeed! Rose Run Quest is owned by Blair Hansen of Charlottetown, PEI. Marc Campbell trains and drives Rose Run Quest & he has done a phenomenal job with this 7 year old gelding. Congratulations to all of the connections of Rose Run Quest on an awesome "TRACK RECORD" wicked mile... it was very impressive! Good job Marc! Do Over Hanover was 2nd (1:52.2) for Jason Hughes and Half Cut was only beaten 3 lengths (1:52.4) for Mark Bradley. All three horses in the top three tonight are indeed fine animals. Congrats everyone!

The Frank & Beth Stanfield Memorial for 3 year old pacing fillies (purse $25,205) had two divisions, but only one race took place as a down pour of heavy heavy rain caused the last two races to be cancelled due to unsafe track conditions. Woodmere Tango (3 year old Articulator filly) and Clare MacDonald got the job done for owner Morah Kerr of Greenfield, NS in 1:58 flat. Woodmere Tango cut every fraction & she wouldn't give up the lead to David Dowling and Woodmere Oleksiak... they rolled past the half in 57.4, 1:28.1 (3/4)... winning by a head over Elm Grove Nellie (Dale Spence) & Emilys Angel (Kenny Arsenault). Congratulations to Morah and Clare -- the female connection!

Happy Anniversary to Emmons and Dixie MacKay of Truro, NS. Emmons & Dixie were married on July 19th, 1969... and they have two children, Ozzie MacKay & Tammy MacKay. The MacKays have been in the harness racing game a long, long time. Congratulations on a wonderful milestone! Here’s to many more great years.

Jeff Ellis recorded his 1st lifetime win with Desir Dorleans (10 year old Goliath Bayama mare) in 1:59 flat at Truro Raceway on Sunday, July 21st. Desir Dorleans is owned by Dawn Ellis Abbott of Truro, NS -- Dawn & Jeff are sister and brother. They are an awesome family connection. Jeff cut all the fractions and led the whole way... 27.2, 57.1, 1:27.3 & finished in 1:59 by 2 lengths. It was also a nice birthday present for Jeff's Father, Donnie Ellis. Happy Belated Birthday Donnie! I am certain Jeff will remember this 1st win for years to come, just as we all remember our 1st win. Congratulations Jeff & I hope you have many more trips to victory lane in the months & years to come. Well done!

The ASS for 3 year old pacing colts "A" division(purse $10,020) went to Red Dirt Rocknroll for driver David Dowling and trainer Lenny Myers in 1:57.1 and the second division went to Red Dirt Boomer for catch-driver Darren Crowe for Gilles Barrieau in 1:55.4. Wicked mile - nice colt. Red Dirt Boomer won by a nose after getting up the passing lane in the final strides. In the Atlantic Aged Pacing Mares Series, there were two divisons: Rocknrols Image won one division in 1:55.1 for driver Jason Huges and Sodwana Bay won in 1:55.3 for catch-driver Darren Crowe subbing for trainer Gilles Barrieau. Two nice mares right there!  Likely to Win was also a winner tonight in 1:56.4 for driver Adam Merner. Catch Twenty Two was victorious in 1:56 flat for driver Darren Crowe. Aaronel and driver Ernie Laffin won in 1:59 flat tonight, as well. Darren Crowe had three winners on the July 20th card. Wayto go Darren! Saturday, July 20th Total Wager: $20,963

Atlantic Grand Circuit Week (AGCW) has come to an end & the summer is flying by... OHW is just around the corner and will be here in no time. The AGCW Annual Golf Tournament was another great success... Congratulations to Craig White of Physio One for winning the men's division with a 57... Team Physio One included: Craig White, Fraser Langille, Heather Pothier, Jonathan Crowe, & Adam Graham. In the mixed division, Team Inglis Jewellers won the mixed division with a 61. Team Inglis Jewellers consisted of: Paul Clark (owner of Inglis Jewellers), Tammy MacKay, Danny Maxwell, Scotty Maxwell & Brenda Rogers. Thanks so much to Rene Allard of "Allard Racing" for sponsoring the winning team jackets this year. Rene, your support is always appreciated! Thank you! Arnold Hagen of Truro/Bible Hill Home Hardware sponsored the "HOT" fantastic breakfast this year. The breakfast was well attended and it was delicious. Thank you, Arnold. Other prizes included: Longest Drive for Men (Marc Whebby), Longest Drive for Women (Heather Pothier), Closest to the Line winner was Spud (Eldon Arsenault), Closest to the pin on #18 for women went to Judy Lynds (nosing out Tammy MacKay in the final strides -- okay, it was the final hole, not strides), and Closest to the pin on #18 for men went to Stephen Trites (sponsored by RG McGroup - Ron & Gail McLellan). Thanks so much to Dawn Ellis Abbott for sponsoring a pair of gloves for every golf player (105 in total) ... Dawn, your support in our business does not go unnoticed... thanks so much for being so considerate! Lastly, thanks to all golf players for coming out this year... we hope to see you all again next year.

Quote of the Week: