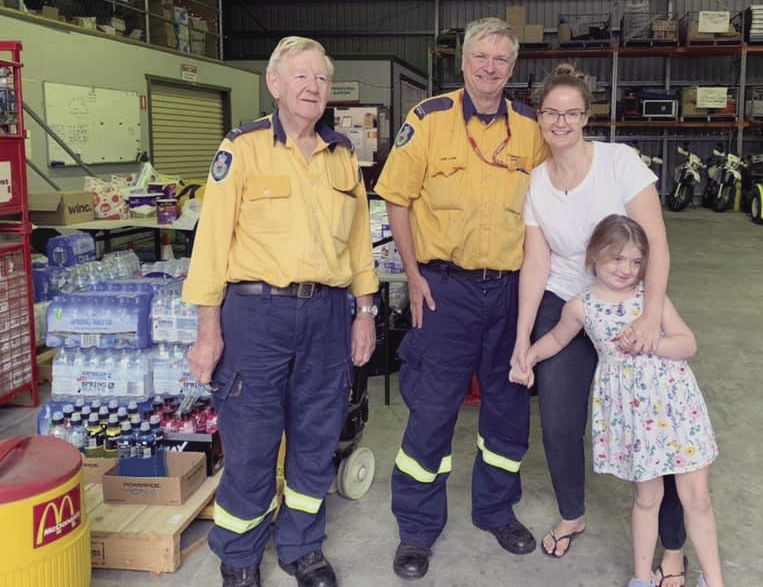 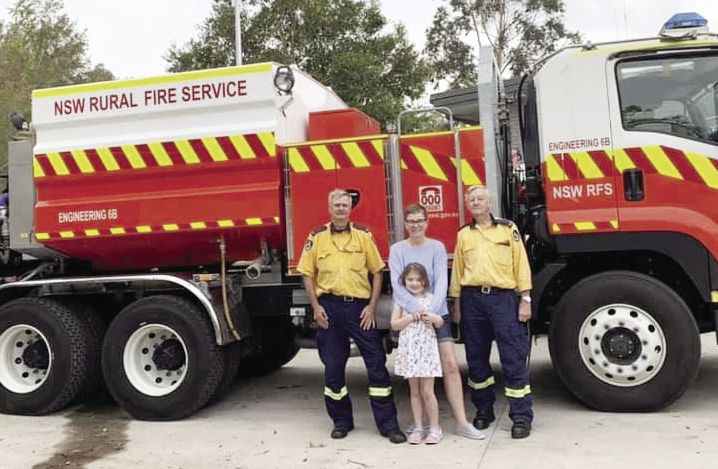 Firefighters in Australia are real life heros these days as they battle unprecedented wildfires across the country. Pam (Clements) Holm and her granddaughter Charlotte stopped by their local fire station last week to thank the volunteers for their valuable service. Ms Holm, formerly of Montague and Beach Point, now lives in Penrith, Australia. She says the situation is devastating and there are still two more months of fire season to contend with. Submitted photo

Firefighters in Australia are real life heros these days as they battle unprecedented wildfires across the country. Pam (Clements) Holm and her granddaughter Charlotte stopped by their local fire station last week to thank the volunteers for their valuable service. Ms Holm, formerly of Montague and Beach Point, now lives in Penrith, Australia. She says the situation is devastating and there are still two more months of fire season to contend with. Submitted photo

“The air is so full of smoke the kids can't play outside. Ash is covering everything, every day,” Pam (Clements) Holm said.

Ms Holm, originally from Montague and Beach Point, has lived in Australia for 20 years and has never seen wildfire conditions as bad as they are this season.

“To give you an idea of what it is like here my back yard grass is dead, it’s brown and that’s the same all through the suburbs.

The whole country is on high alert.

New South Wales and Victoria are in a state of emergency.

Ms Holm lives in Penrith, New South Wales, a community about an hour drive inland from Sydney. There are fires burning to the north, south and west of her community.

In a nature reserve bordering on the west side of the community, dozens of fires are burning a mere 20 kms away.

“It is horrendous,” Ms Holms said, describing the devastation that has swept through the entire country as more than 14 million acres of land has been destroyed by out of control wild fires so far this season. That number is expected to reach an alarming 50 million.

In a normal year rain would become a mitigating factor in helping to squelch the fires, but with three years of drought in the rear view mirror and no significant rain in the forecast, the picture is grim.

“The thing about the fires that a lot of people don’t understand is years ago they used to do a lot of fire reduction (known as back burning in Canada) and these days they don’t do that as much so there is a lot of fuel on the ground and in the bush,” Ms Holm said.

“The air is very dry here so when something lights it just goes up.”

Growing up in Montague with her father Kenneth Clements as the fire chief, Ms Holm is quite attuned to fire safety and awareness.

“The way I look at it is when there are fires around you are on high alert, because they move fast,” she said.

For Aussies that means having a bag packed and at the ready to evacuate on a moment’s notice.

The danger is very real and the catastrophe that has already happened to so many is sad.

As of Tuesday morning there were 118 fires burning in NSW with more than 50 not yet contained, according to a spokesperson from NSW Rural Fire Service.

To date 25 lives have been lost, thousands of homes and many businesses are destroyed and it is estimated the number of wildlife lost is close to a billion.

“The recovery from what has already happened will take years,” Ms Holm said.

Yet, amidst the daily uncertainty there are the good news stories of people reaching out to help.

Ms Holm, her daughter Lindsay and granddaughter Charlotte filled the car with cases of water, Gatorade and snacks one day before Christmas and delivered it to their local fire station.

It was much appreciated as two “fabulous but tired men took the time to talk and share” when the family dropped off the donation.

“Firefighters are real life heroes,” Ms Holm said of the thousands of volunteers throughout the country who have been putting their lives on hold for the past four months.

“They have been volunteering for weeks on end, not going to their day jobs and going out and fighting fires in 40 degree Celsius temperatures.”

In recent weeks other countries, Canada included, have sent contingents of firefighters to help.

Among a group from western Canada was the husband of a former neighbour of Ms Holm's in PEI.

Arja (Martin) Romaniuk was Pam’s neighbour and her husband Brad Romaniuk is now in Australia helping the firefighters.

“It is one of those small world stories that no matter where you go you find something that connects people,” Ms Holm said.

“People around the world are amazing, please everyone continue to pray for Australia.”