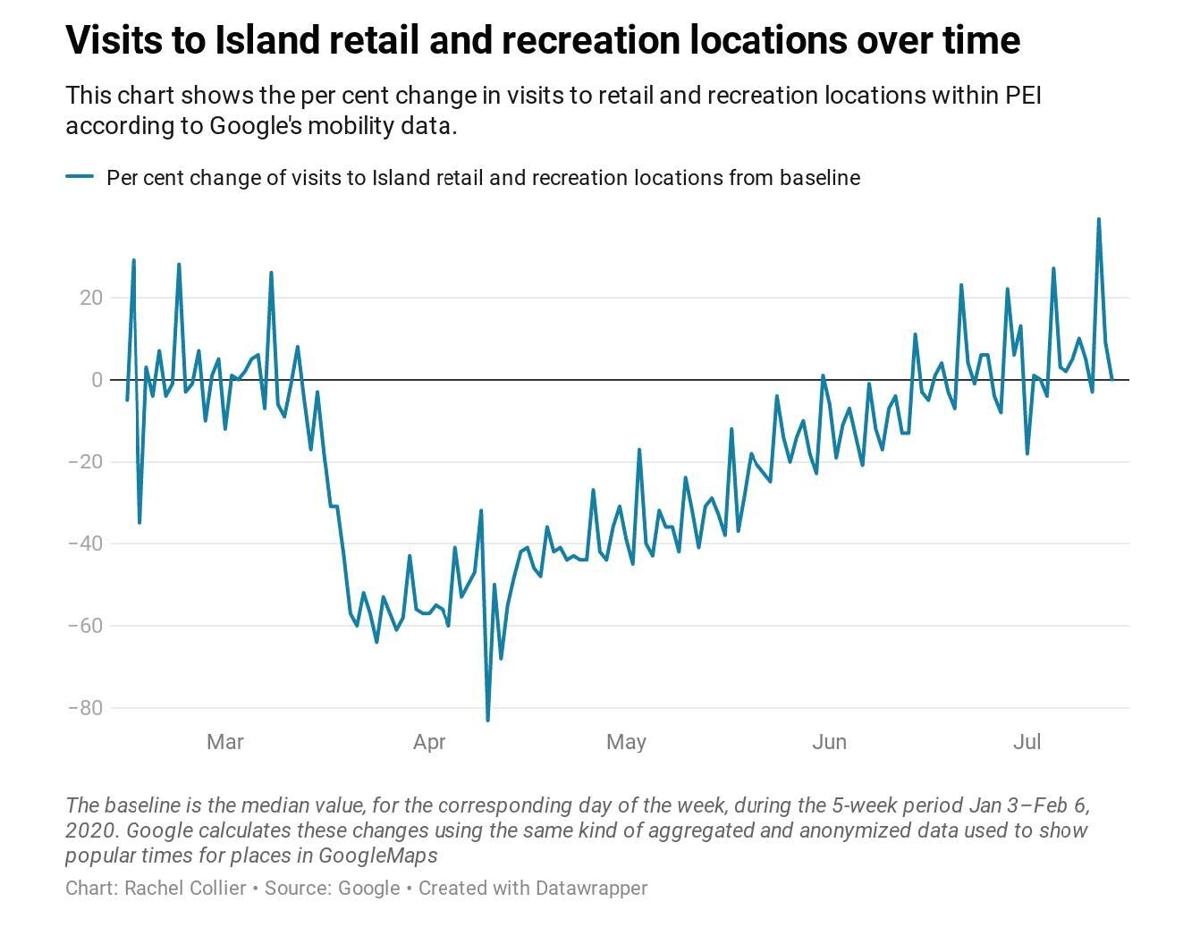 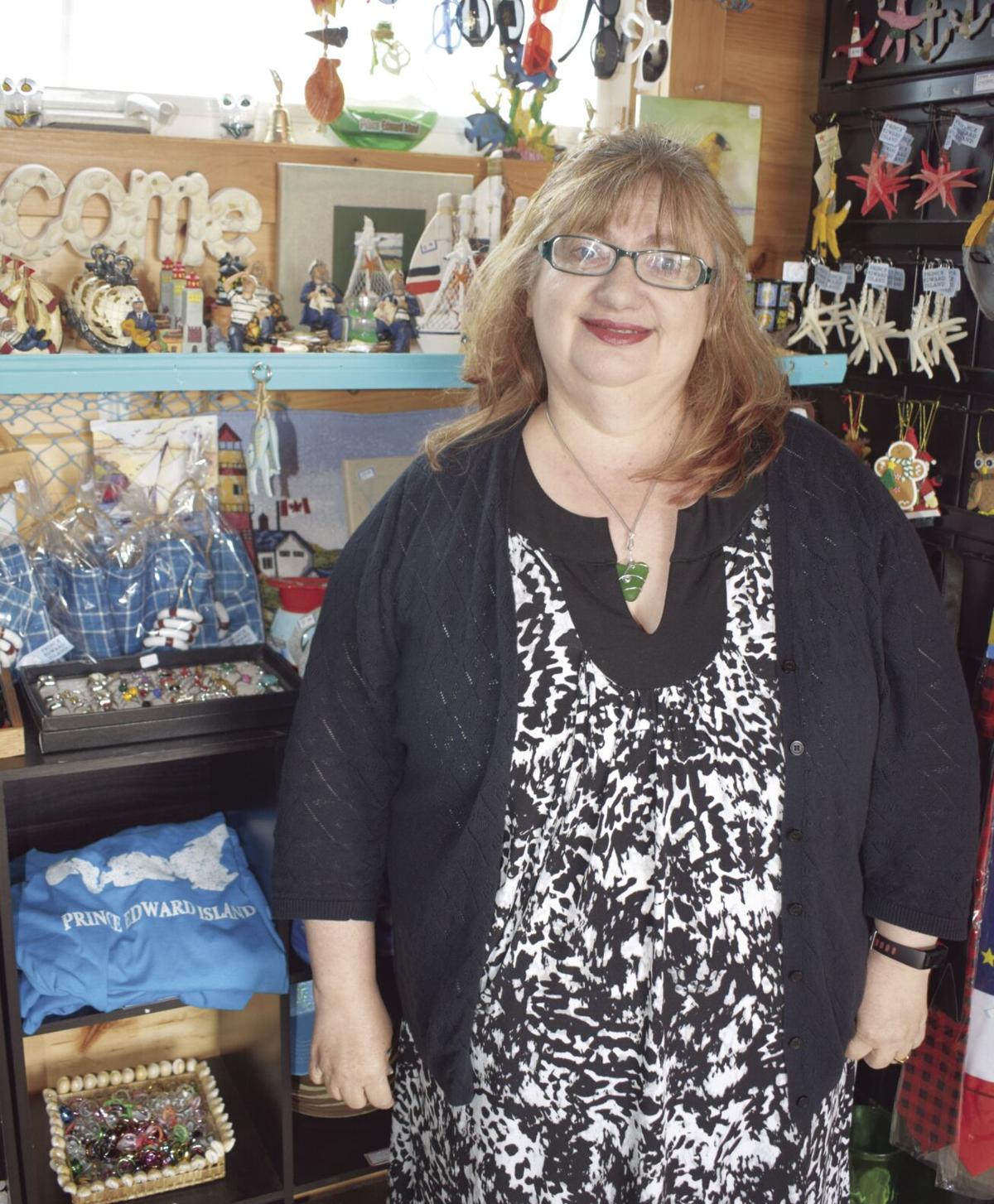 Patricia MacLean of Souris owns and operates Oh Fudge! and the Seaglass Shanty. She said the tourist items on the shelves are not moving this season. Charlotte MacAulay photo

Patricia MacLean of Souris owns and operates Oh Fudge! and the Seaglass Shanty. She said the tourist items on the shelves are not moving this season. Charlotte MacAulay photo

As pandemic restrictions have eased and the Atlantic tourism bubble has opened, Islanders and visitors are on the move.

Approximately 38,000 people entered the Island in the week following the start of the Atlantic tourism bubble.

Google mobility data shows travel to retail and recreation locations on PEI has reached levels comparable to the months leading up to the pandemic.

While those numbers have increased since April and March, Jim Cormier, director of the Atlantic Branch of the Canadian Retail Association, said it’s too soon to truly measure any rebound.

“A lot of people think they’ve made it through the woods and everything is going to be good. Actually, it’s almost the exact opposite,” Mr Cormier said.

“These shops have gotten through a trying time but their bills are due, people expect their money and they’re still trying to move older inventory.”

Ms McLean said her fudge sales took a nosedive in March before picking back up to profitable levels. She has been shipping orders to Islanders and sales to foot traffic in the shop have started to increase too, but even her fudge sales haven’t completely rebounded.

Her seaglass shop, which is typically filled with trinkets, keepsakes and souvenirs, all merchandise Ms McLean ordered in November, hasn’t been moving inventory.

“The bubble has not been one bit helpful,” Ms McLean said.

“Last year on any given day, you couldn’t find a parking spot down there,” she said, referring to Gateway Park located just after the Souris causeway. “Now it’s never filled. I would say sales have gone down 90 per cent. We do not have the tourists coming to buy their gifts for their families. Islanders do not want the tourist items.”

Ms McLean has noticed a lot more customers coming in just to browse.

“I can understand they don’t want to spend money more than I want to but just looking won’t pay the rent.”

Ms McLean sees a lot of traffic is Atlantic Canadians rushing to PEI to visit family in case restrictions are reinstated. Their intentions aren’t necessarily to vacation like usual.

Premier Dennis King said the influx of traffic is only a fraction of what would be seen at this time in years past.

The province’s preliminary estimate of visitor volume in 2019 is approximately 1.6 million.

The same source shows 45-50 per cent of Island visitors usually arrive in July and August. That would work out to be between 90,000 and 100,000 visitors per week during these two months.

“There were two cars at Basin Head the other day. It was a beautiful day in July, I’ve never ever seen that before. Even on a rainy day you’d have more people there,” Ms McLean said.

Mr Cormier said in Atlantic Canada the vast majority of retail sectors in all four provinces experience a boost in sales during the tourism season but some sectors will feel it more than others.

Approximately 9.6 per cent of spending by overnight pleasure visitors is on shopping, according to Tourism PEI’s 2018-19 visitor exit survey data.

“It depends on the type of retailer you are and where you are located,” Mr Cormier said.

“Building material retailers and grocery retailers saw significant increases during the pandemic,” Mr Cormier said. “They were shopping more because they were eating at home and after a month or so people were getting bored so people started home improvement projects.”

He mentioned that electronics retail sales held steady in PEI compared to other provinces too.

Meanwhile sporting goods, apparel and a variety of other retail sector sales dropped.

“Over the past few months, overall retail was down nine per cent. That’s big,” Mr Cormier said, referring to data leading up to and including the month of April.

Lorna Larocque manages the KCMH Auxiliary’s Nearly New used clothing shop in Montague. She said since restrictions have eased the shop sales have been the same as normal.

After an entire month with no car sales, Lonny Fennessey, owner of Fennessey Motors Inc in O’Leary, said sales have gradually come back up.

“They’re pretty much back to normal now,” he said.

Dale MacAusland, who is part owner of MacAusland’s Woolen Mills Ltd, which is known for wool and high quality, 100 per cent virgin wool blankets, said his numbers are up so far. He has continued to sell products online, by mail order and by curbside pickup.

He is unsure what to expect from August through September. Seasonal residents from the United States are big customers which he is missing to an extent this year.

This year due to the effects of COVID-19, used tires were harder to come by but Mr Milligan said he sold lots of new tires just the same.

Mr Cormier notes a clear understanding of the most recent changes within retail sectors will only be possible when Statistics Canada releases more data in coming months.

Cliffside Inn
Island Press Contact Info
SAVE UP TO 70% OFF