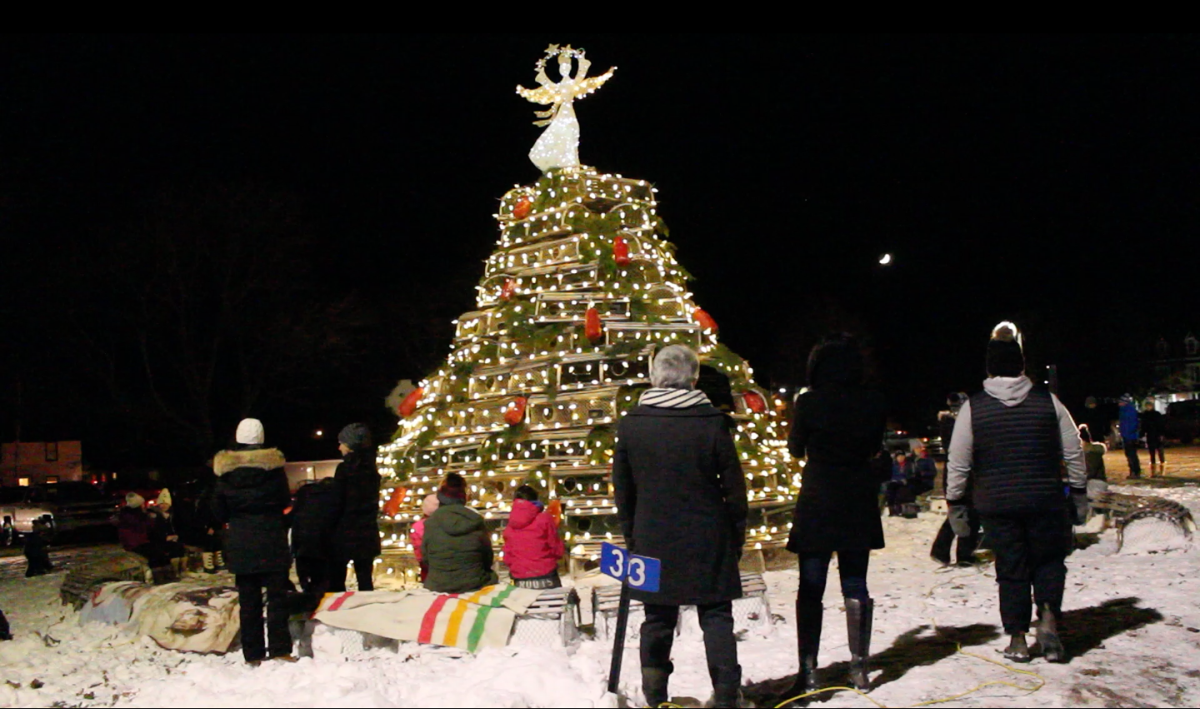 The lighting ceremony for the Lobster Trap Tree in Tignish took place on Dec. 1. The family of Lorry Gaudet, who downed in 1996 while fishing, were given the honour of lighting the tree. Melissa Heald photo 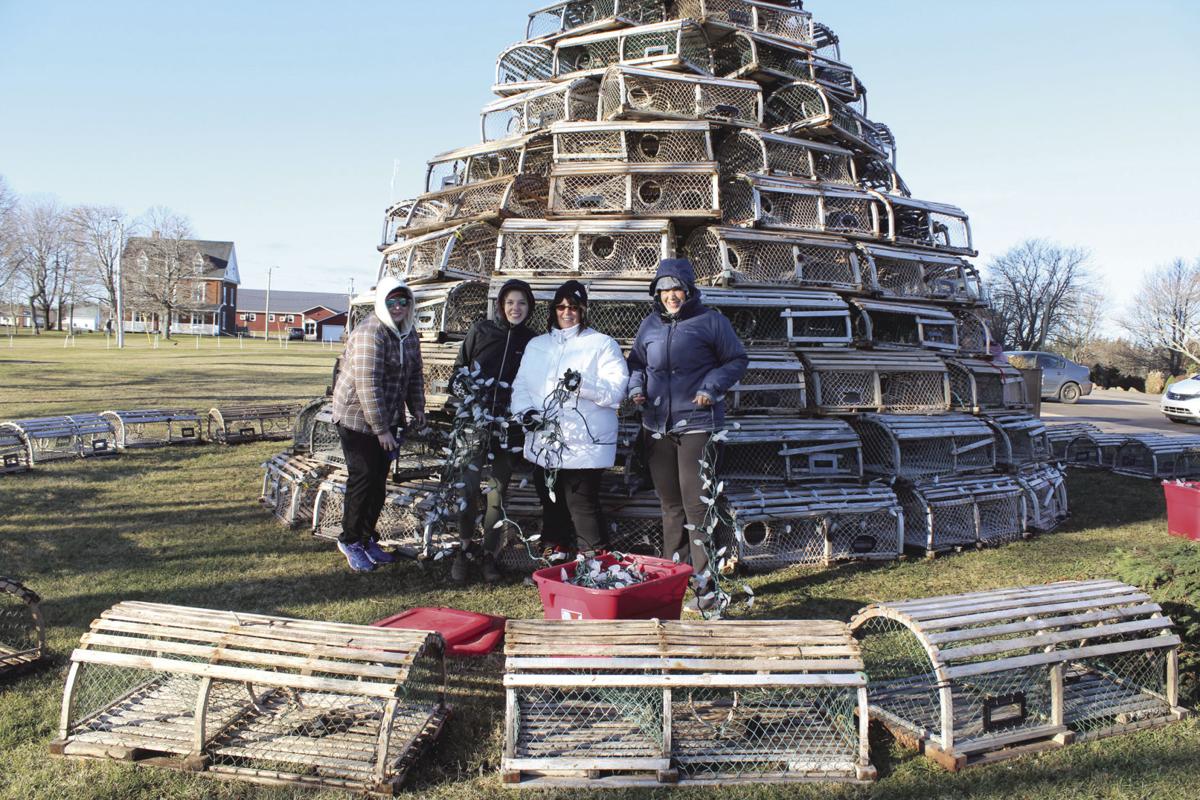 Participants from Stepping Stones to Success volunteered to help decorate the lobster trap tree in Tignish. Decorating for the tree began on Nov. 27 after the structure was built on Nov. 26. This year the lobster trap tree is two rows taller. In photo: L-R: Julie Gallant, Payton Gavin, Maureen Chaisson and Alana Leard. Melissa Heald photo

The lighting ceremony for the Lobster Trap Tree in Tignish took place on Dec. 1. The family of Lorry Gaudet, who downed in 1996 while fishing, were given the honour of lighting the tree. Melissa Heald photo

Participants from Stepping Stones to Success volunteered to help decorate the lobster trap tree in Tignish. Decorating for the tree began on Nov. 27 after the structure was built on Nov. 26. This year the lobster trap tree is two rows taller. In photo: L-R: Julie Gallant, Payton Gavin, Maureen Chaisson and Alana Leard. Melissa Heald photo

A favourite from last year’s holiday season has returned to Tignish with the hope it will become an annual tradition.

Standing two rows taller than the year before, the town has once again constructed it’s memorial to fishermen by building a Christmas tree made out of lobster traps.

“We say we’re going to do this every year until we can’t do it no more,” said Tina Richard, recreation director for the town.

Ms Richard spearheaded the construction of the lobster trap tree last year as a tribute to all fishermen, but was inspired to do so by the September 2018 tragedy in North Cape, where Captain Glen DesRoches and his first mate Maurice ‘Moe’ Getson perished when Mr DesRoches’ boat, the Kyla Anne, capsized.

“The response last year was huge,” said Ms Richard. “We had so many people who wanted to help.”

The community helped in all sorts of ways, from donating the traps to the labour in building the tree to helping to donate a 100 sets of Christmas lights for decoration. Not all 100 sets could be used last year, but this year with the structure being slightly taller, the hope is all the sets of lights will be placed on the tree to help illuminate it.

“So we knew the response was going to be big this year because so many people wanted to get involved,” said Ms Richard. “We were so glad when all the volunteer guys meet yesterday.”

Nineteen people came out on Nov. 26 to lend a hand in constructing this year’s tree. Using 191 traps, it took about three and half hours to build the structure. With the help of participants from the Stepping Stones to Success, decorating of the tree began on Nov. 27. But with high winds in the forecast for the next few days, placing of the five and half foot steel wire mesh angel at the top of the tree was being delayed until Dec. 1.

Sunday evening was also when the town held their official tree lighting ceremony. The family of Lorry Gaudet, who downed in 1996 while fishing, were the ones who given the honour of lighting the tree.

Carolyn Gaudet, the widow of Lorry Gaudet, said she was honoured when Ms Richard asked her family to be part of the tree lighting ceremony.

“It’s unbelievably beautiful,” said Carolyn of the tree once it was lit.

Carolyn said her husband was a fun-loving and kind soul that everyone loved.

“I can just see Lorry looking from the beyond right now and thinking ‘Wow, what a beautiful thing for our community to get together and do in memory of all our loved ones who were lost at sea’,” she said.

Musician Julie Arsenault sang Christmas carols and also performed the song she wrote following the September 2018 accident in North Cape. A cousin of Lorry Gaudet, Keith Gaudet, performed a song he wrote in memory of his family member.

The parents of Jordan Hicken, Trevor and Kimberly Hicken, travelled from Montague to be part of the tree lighting ceremony. Jordan was tragically lost at sea in May 2019 when he fell overboard into the waters off Naufrage Harbour.

With tears in his eyes, Trevor said the lobster trap tree was beautiful following the lighting ceremony.

Ms Richard told the crowd who had gathered for the tree lighting ceremony that it could be an emotional evening for some people.

“But we also want it to be a joyous evening where friends and family get together and pay tribute to a loved one,” she said.

Mayor Allan McInnis agreed the evening could be emotional for some of those attending.

“However, it makes you understand how close Tignish and area are to one another, in order to come out and pay tribute to our fishermen of the past, the present and the future,” he told the crowd.

Mr McInnis, as a fisherman himself for many years, knows the perils often associated with fishing.

“People you have never fished don’t understand what fishing is all about,” he said. “It’s not an easy job... When you’re out there in all kinds of weather, not knowing if you are going to get home to your family, it’s a life that only a few in this world can do and stay at it.”

Mr McInnis said he would like to see the tradition of building the lobster trap tree continue for many years to come.

New this year is wooden buoys that could be purchased for a donation from the town. People will be allowed to place the buoys on the tree in memory of a loved one from the night of lighting ceremony onward.

Ms Richard said she hopes the tree can be seen as a way to bring families together.

“I know I’ve spoken too many families who didn’t lose their family member at sea, but fished for their whole life,” she said. “For them the tree symbolizes their dad or mom or grandfather, that have spent their whole life at sea... If that’s all this tree does, then I’ve succeeded enormously.”