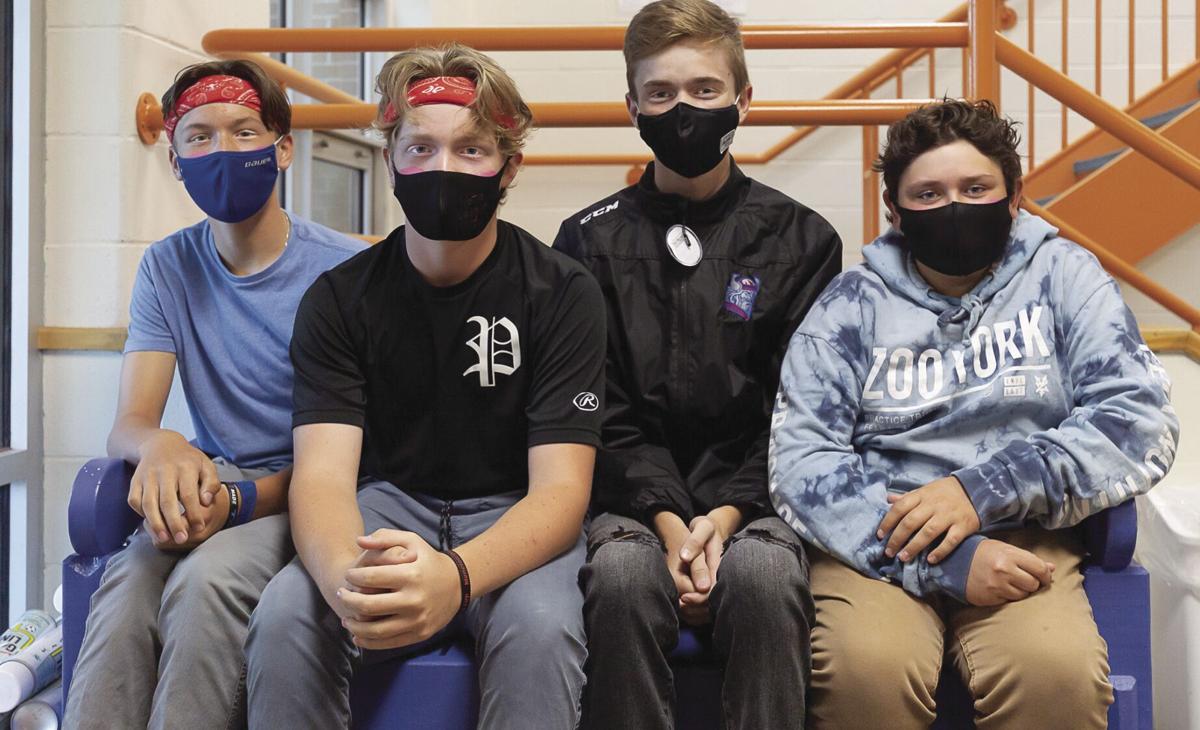 The boy’s golf team from Montague Intermediate were loving the conditions for the provincial school golf tournament at Avondale Golf Club last week. The wind and rain in the forecast held off. The team walked away with a gold medal and team members Wason Bulpitt and Thomas MacEachern nabbed silver and bronze respectively. From the left are Conner Gotell, Thomas MacEachern, Wason Bulpitt and Demetri Hicken. All four boys are in grade 9. 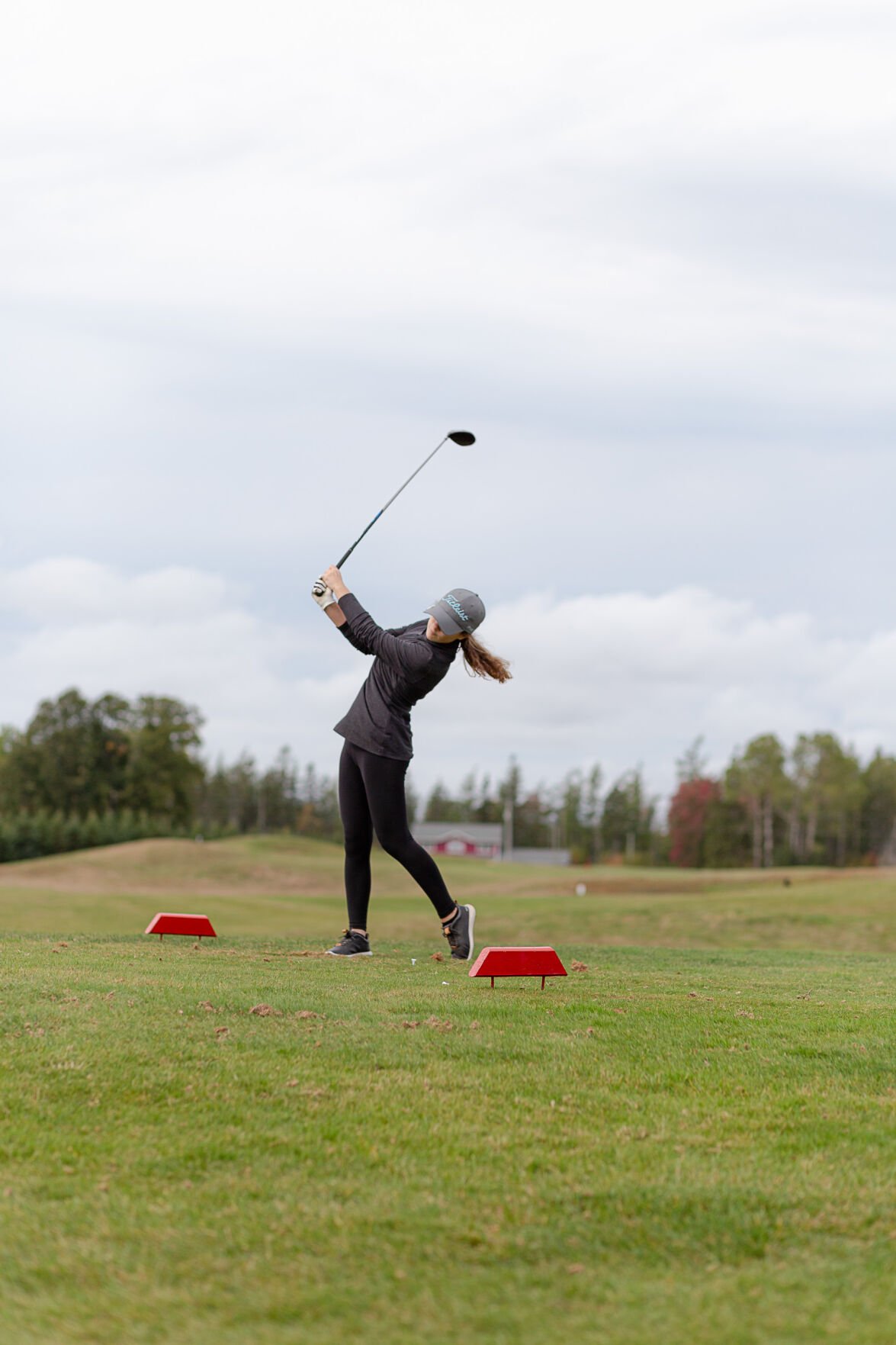 Brayah MacDonald of Montague Intermediate School hits her first drive of the 2020 intermediate provincial golf tournament at Avondale Golf Club on Wednesday. Ms MacDonald was one of 31 girls from across PEI in the competition. 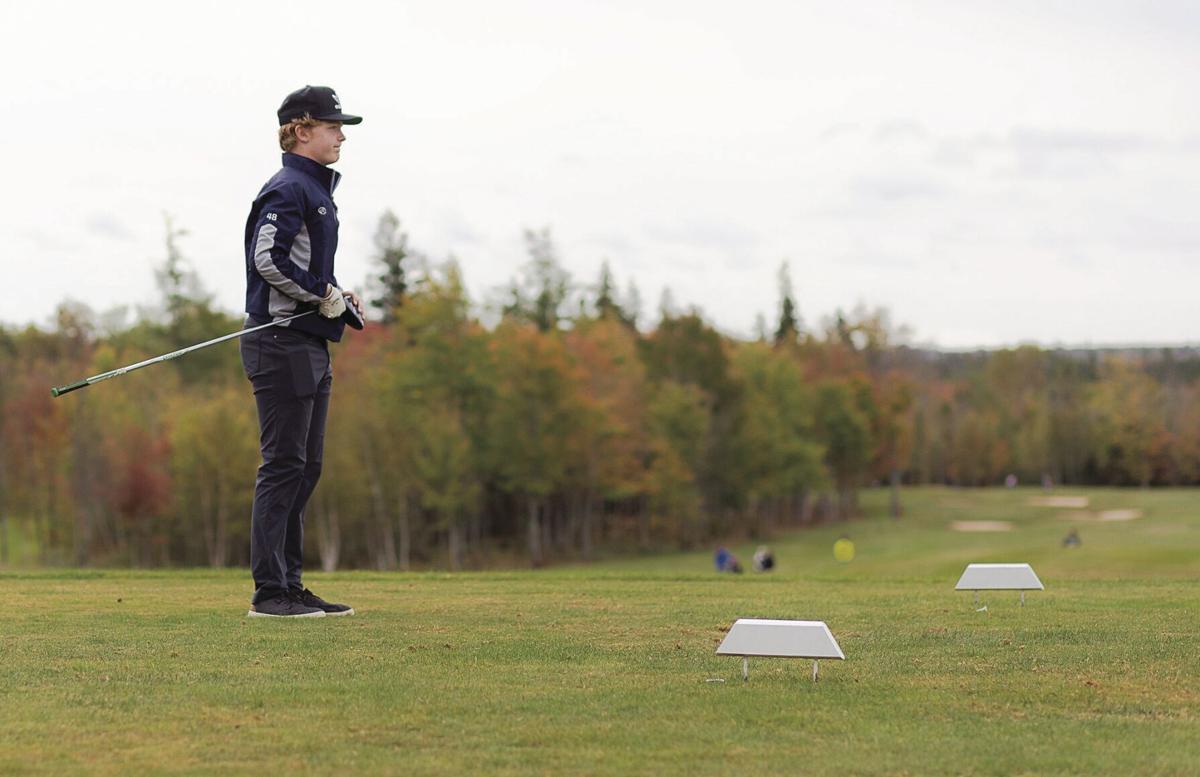 Thomas MacEachern, of Montague Intermediate School, watches for his first ball of the 2020 intermediate provincial golf tournament to land. The PEISAA tournament was held at the Avondale Golf Club last week. The boy’s division played 18 holes in the competition and the girls division played 9. Sean MacDougall photo

The girl’s golf team at Montague Intermediate School want to be on par with their male counter-parts in regards to the number of holes they play in the provincial competition.

Students in Grades 7-9 competed at Avondale Golf Club in Vernon River last Wednesday. The course had 68 boys and 31 girls form groups of three and four players with staggered tee times.

In keeping with past tournaments, the girl’s division is resigned to playing nine holes while the boys play a full 18.

“That has been the way it has been since the golf started in the PEISAA.”

He said there has been interest and discussion around extending the girls competition to 18 holes.

“We shouldn’t even have to talk about this,” Brayah said.

She has been playing golf for a number of years as has her sister Lexie.

The eighth grader is comfortable playing a full 18 holes as is Lexie.

Lexie, a ninth-grader, walked away with a gold medal for the individual girl’s division with a score of 45 in the tourney.

The experience is something for her as she is learning about human rights and equality in her social studies class while this has been happening.

“I don’t like it at all,” Lexie said regarding the nine-hole limitations.

She feels a full 18 would allow girls to better improve their score if they happen to do badly on a hole.

Currently PEISAA intermediate golf only has one division, but Mr Bridges said that may possibly be extended.

“We only have what we would call AA level in golf. It is something we are going to look at in the future, whether we should have an A level, boys and girls, that would only do 9 (holes) and a AA level that would do 18,” Mr Bridges said.

He said it would be nice to tell all the kids in the tournament to go out and play 18 holes but newer golfers may find 18 holes frustrating.

Lila Johnstone played alongside Brayah and Lexie in the tourney. It is her first year golfing but she feels at home playing a full round.

“I would say in the summer, most girls are very comfortable playing 18 holes,” Mr Morris said

With the limitations in place for sports teams this year, Mr Morris held open tryouts at Brudenell Golf Course where both boys and girls played nine holes. The tryouts resulted in four boys and three girls selected for the 2020 one-day provincial tournament.

“There’s no reason for (the girl’s team) to be playing nine holes,” Wason said.

Melissa MacKinnon was at the golf course Wednesday while her daughter Isabelle, from Queen Charlotte Intermediate School, competed.

The fact her daughter is still playing nine holes in provincials disappoints her. She sees the Island as a breeding ground for young talent both male and female.

PEI is home to more than 20 golf courses.

She sees intermediate players as needing two divisions for both boys and girls. She said the kids have a lot of potential and newer players having an opportunity to play 18 holes may be less intimidating.

“The sky is the limit,” Ms MacKinnon said.

Sean MacDougall is a reporter with The Eastern Graphic