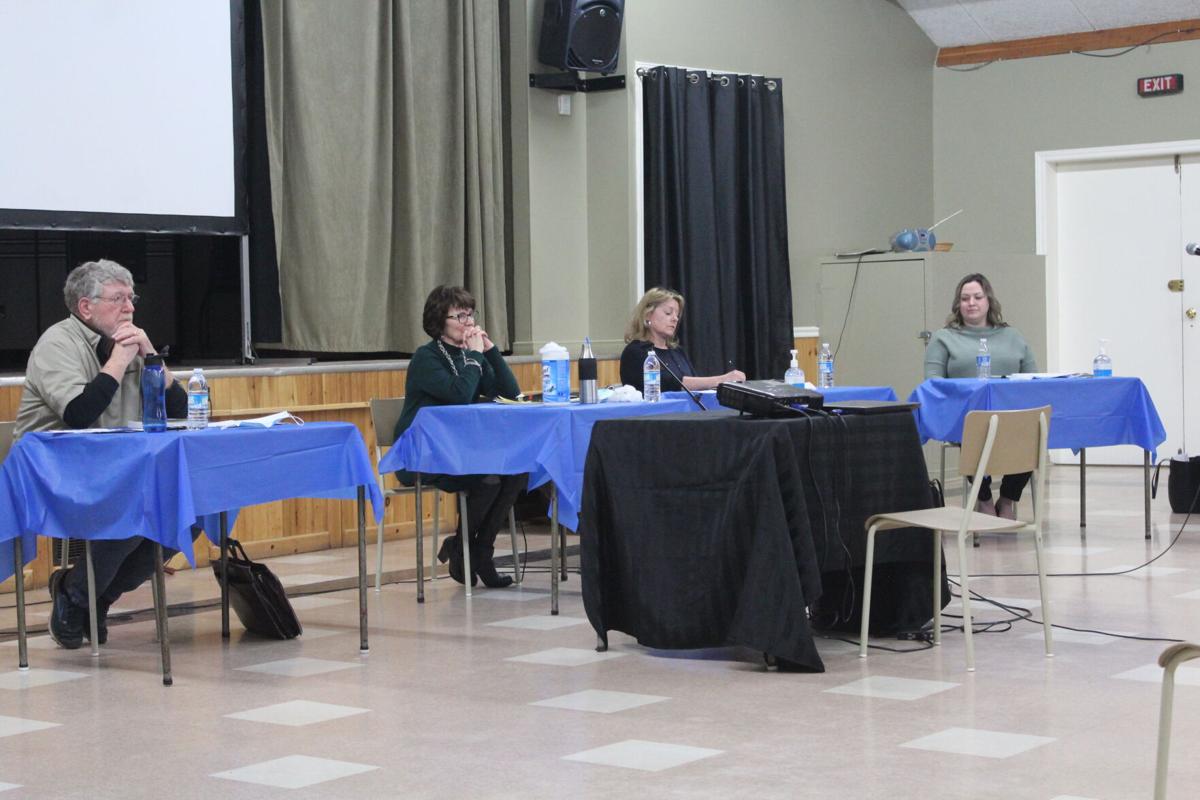 Tignish Credit Union board members and staff listen to concerns about a proposed merger with three other credit unions during a second information session on March 24. The first session was last Wednesday, with another planned for March 29. The other three credit unions will also be hosting sessions over the next week. In photo: L-R: board member Victor Hogan, board president Karen Gaudet-Gavin, Tignish Credit Union CEO Arlene Hackett and Alberton branch manager Coralee Stewart. Melissa Heald photo 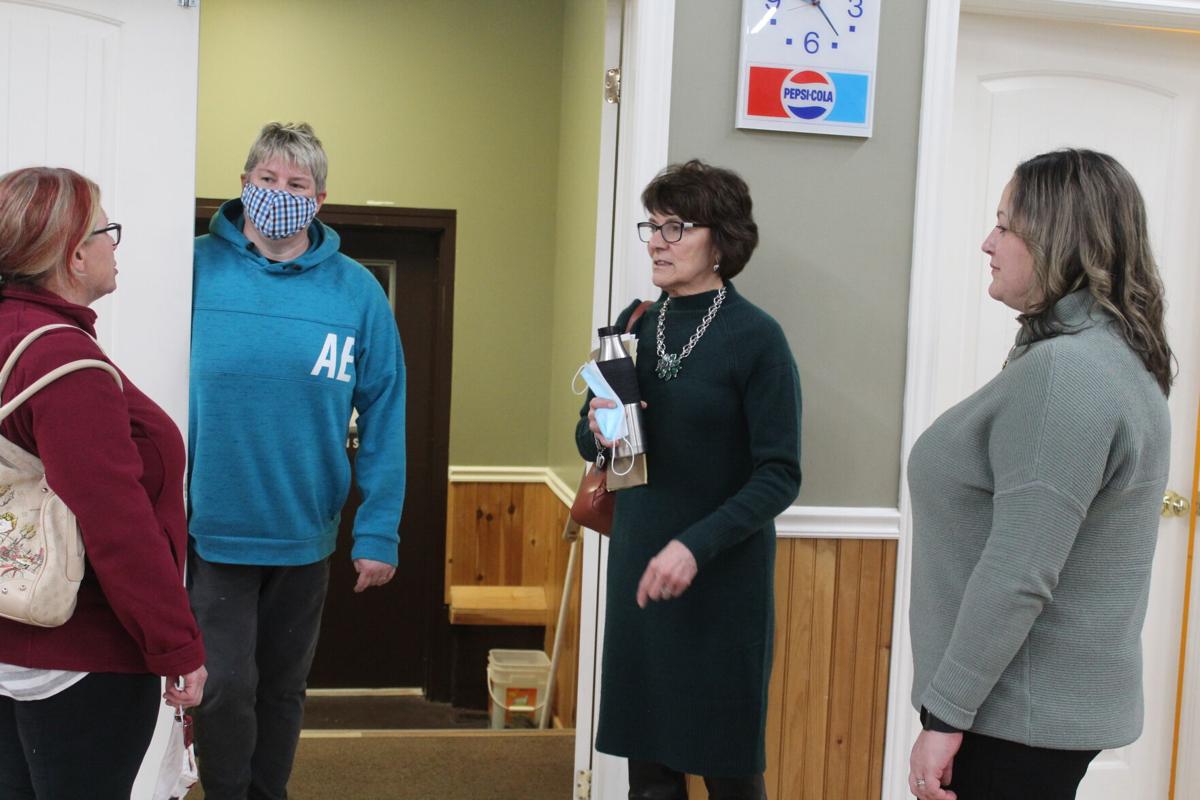 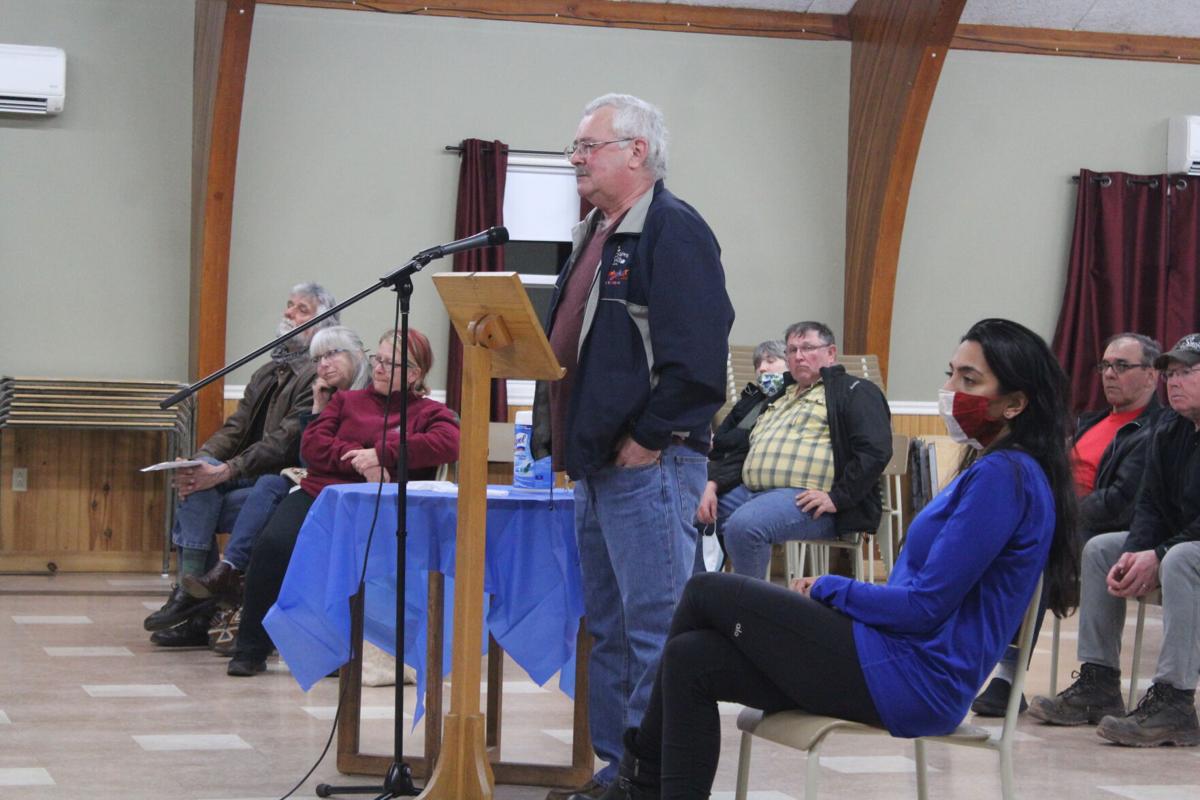 Tignish Credit Union member Glen McRae expressed his concern at a public meeting on March 24 that a proposed merger with three other Island credit unions would mean losing control over the community’s own credit union. Beside him, sitting in the chair, St Felix resident Melissa Handrahan asked the board if they considered any potential downsides to Tignish joining the amalgamated credit union, pointing to the success of their credit union compared to the other credit unions involved in the proposed merger. Melissa Heald photo

The vice president of the Tignish Credit Union board knows a proposed merger with three Island other credit unions is a big move, but one she sees as necessary to secure the future of the financial institution.

“At the end of the day, when one looks at all the information, the whole picture, all the facts and all the possibilities, all the reasons for the merger, we as the credit union and its members, young and old, there’s so much more to gain than to lose,” said Mona Jeffery at a community information session on March 24.

That’s why Ms Jeffery is 100 per cent in favour of the merger.

“I would rather Tignish Credit Union be part of something better than being left behind,” she said.

The first of a serious of public information sessions on the merger began on March 23 in Tignish. With only having space for 50 people, Tignish held a second meeting last Wednesday and will be holding another session on March 29.

The credit unions involved in the merger are saying the move will allow them to pool resources and see their members have better access to modern services.

“The changes in technology are fast and furious,” said Tignish Credit Union CEO Arlene Hackett. “We certainly can’t afford to keep up with the pace of the big banks.”

The merger would also give Tignish a chance to be competitive by offering the best rates and fees possible, with Ms Hackett also highlighting the potential cost saving involved.

“A lot of products that we get, we have to pay per credit union,” she said. “By merging we automatically save three quarters of the cost.”

Board member Gail Shea added the merger offers the Tignish Credit Union a chance to diversify its loan portfolio.

“Right now, fishing loans make up about 50 per cent of the loans at Tignish Credit Union,” she said. “It’s great to have that business and it’s great to see the fishermen supporting local, but it’s also high risk as well because it’s not a very diverse portfolio and if something goes wrong in the fishing industry, not just the members feel it, but the credit union feels it as a whole too.”

By merging with the three other credit unions who are not heavily reliant on fishing, it would give the Tignish Credit Union sustainability during any down times, said Ms Shea.

Credit union members who got up to speak and ask questions expressed concerns about giving away assets, the in-branch voting process, the name of the new credit union and worries of seeing an end to local annual general meetings (AGM) and not being able to vote for a board made up of local members.

“We’re not giving away our assets, we’re going to gain,” said board president Karen Gaudet-Gavin. “All four credit unions are going to gain as one and we will be stronger as one.”

Although the board highlighted potential risks the credit union could face by not joining the merger, St Felix resident Melissa Handrahan wanted to know was there any downside to Tignish joining the amalgamated credit union, pointing to the success of their credit union compared to the other credit unions involved in the proposed merger.

“Is there a risk somewhere down the road for their indebtedness or their problems because we are becoming one and we’re sharing,” she said.

Ms Shea, who was initially against the merger, said she had concerns about the potential centralization of their credit union.

“The last thing I wanted to hear was Charlottetown,” she said. “I go to the first meeting and lo’ and behold, there was actually no one in the room who was actually from Charlottetown... That’s what gave me a great deal of comfort with the concerns I had going in. They’re four like minded organizations. The benefits, I would say, outweigh the risks by a lot.”

The manager of the Alberton Branch of the Tignish Credit Union explained why staff are supportive of the merger.

“When I first presented the information to my staff about the proposed merger, I wasn’t sure what their response would be,” said Coralee Stewart. “Every staff immediately said we need to be apart of this. Their only concern was what would the future of the Tignish Credit Union would look like if we don’t merge.”

Ms Stewart said over the past five years the credit union has lost 12 full-time employees due to various reasons. And the organization currently doesn’t have a human resource department.

“Attracting individuals with specific skill sets to the area has been a challenge that has continued to increase over the years,” she said. “This has caused our staff to wear too many hats.”

The merger would allow the credit unions to share resources.

“It would mean better training with staff, less duplication of four individual credit unions, more specific roles for staff and more opportunities for advancement without having to relocate into another area and access to a larger support system,” said Ms Stewart.

Member Glen McRae questioned whether competing against the bigger banks was the right move for the Tignish Credit Union.

“Even with this merger, you’re not going to compete,” he said. “If the Tignish Credit Union merges with the other ones, it’s going to be the Provincial Credit Union and we will lose control. And if there is a down turn in the fishing industry, do you think that credit union is going to be willing to totally subside this area?”

Ms Gaudet-Gavin reassured Mr McRae that Charlottetown will not have control over the new credit union.

“The possibilities of the credit union closing will still be there regardless if we are the Tignish Credit Union or the Provincial or whatever we are,” said Mr McRae. “I firmly believe that.”

During her eight years on the board, amalgamation talks have happened on three separate occasions, said Ms Jeffery.

The first two times the board decided not to pursue a merger because the structure of the new organization wasn’t right. When the topic of merger was raised again in January 2020, members of the Tignish board decided to keep an open mind, but also knew they had to be convinced this would be right for their credit union.

From the beginning, the board was clear they didn’t want to see any job loses or branch closures and the new credit union should have a non-centralized model. The Tignish board also made it clear they wouldn’t support a take over.

Ms Jeffery said it quickly became clear that the other credit union boards were on the same page and that’s why the Tignish board has thrown their support behind the proposed amalgamation.

“The structure, the business case of the new credit union makes sense,” said Ms Jeffery. “The partners are right.”

In-branch voting for members is from April 14-28. The vote requires a two-third majority to approve the merger, which would come into effect on Oct. 1