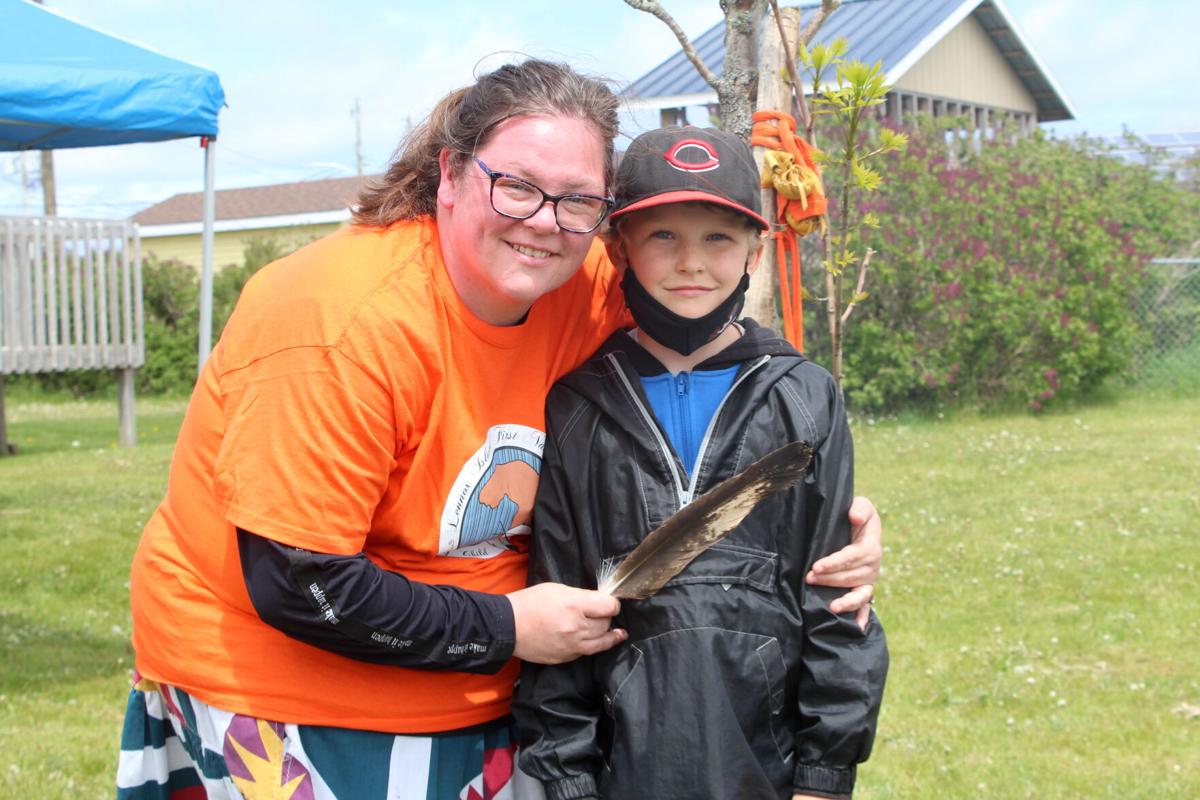 Gabriel Gallant-Loo presented Jamie Thomas, director of culture and tourism for Lennox Island First Nation, with an eagle feather he had found ahead of the visit his school, École Saint Augustin, made to the community. Ms Thomas said the gesture shows a level of respect when in comes to the work toward reconciliation, adding how seeing it from a child’s perspective makes it more meaningful, and so much more validating. Jillian Trainor photo 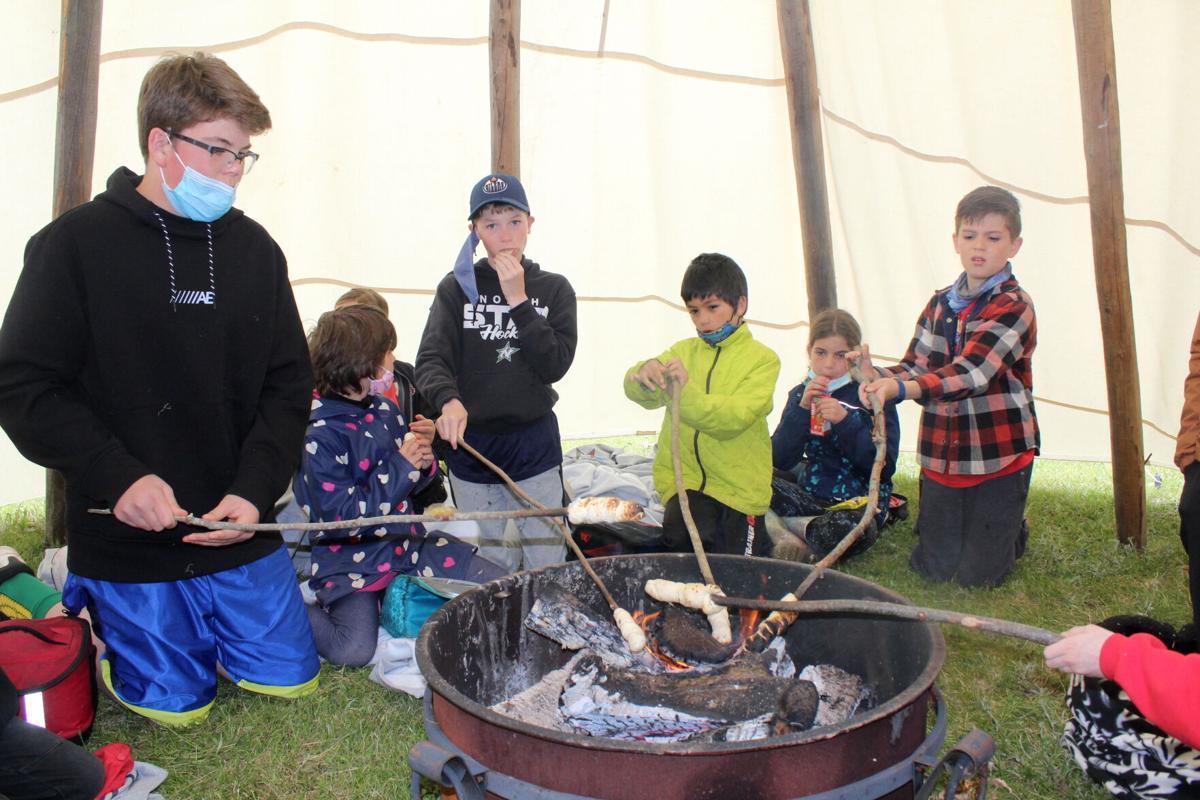 One of the activities students from École Saint Augustin took part in during their visit to Lennox Island First Nation on June 1. Afterward, students were given a tour of the reserve, culminating in a visit to the Lennox Island Mi’kmaq Cultural Centre. In April, members of Lennox Island First Nation visited École Saint Augustin where students built miniature teepees, and built their own talking sticks while learning more about the Mi’kmaq culture. From left to right: Anderson Gallant, Dylan Andrews-Christian, Felipe Quispe, and Leo Ferguson. Jillian Trainor photo 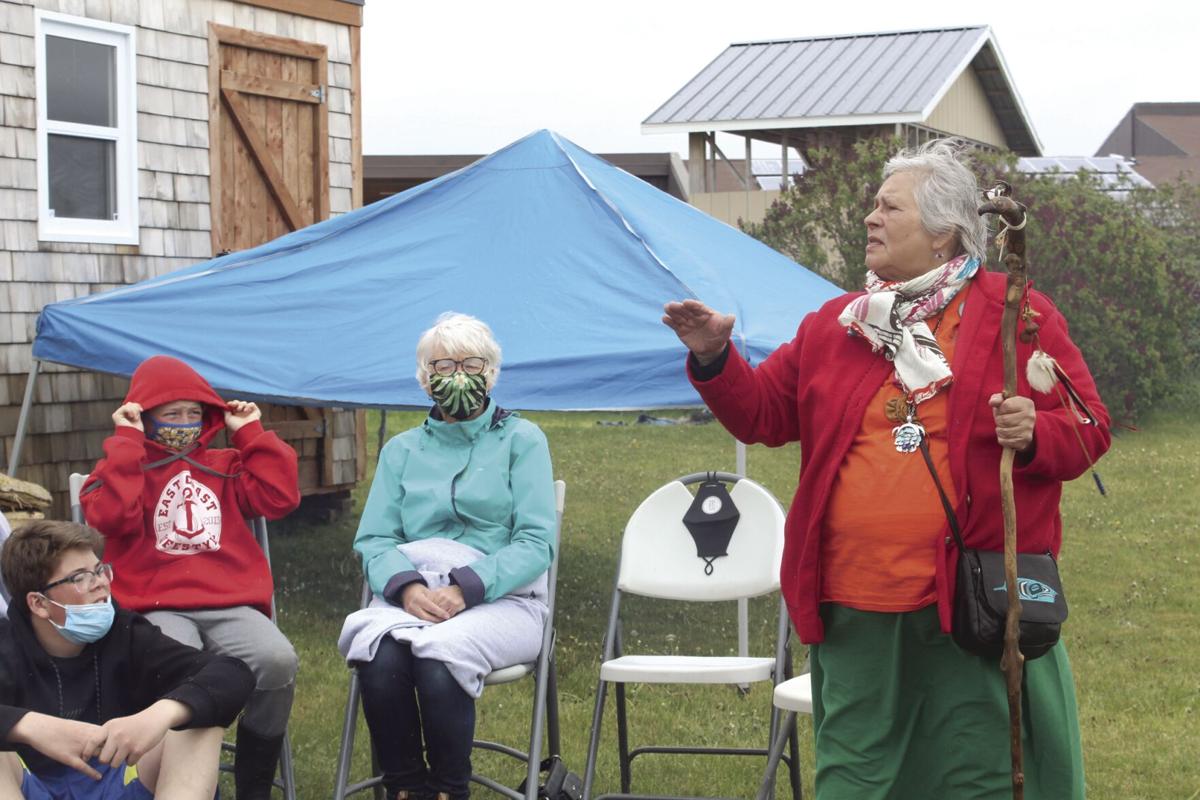 Elder Mathilda Knockwood Snache teaches the students of École Saint Augustin about the importance of a talking stick during the school’s visit to Lennox Island First Nation. During the visit, each student gave an offering of tobacco and prayers from the heart to the sacred fire burning to honour the 215 children found at the site of the residential school in BC, with a smudging ceremony taking place shortly after. Jillian Trainor photo 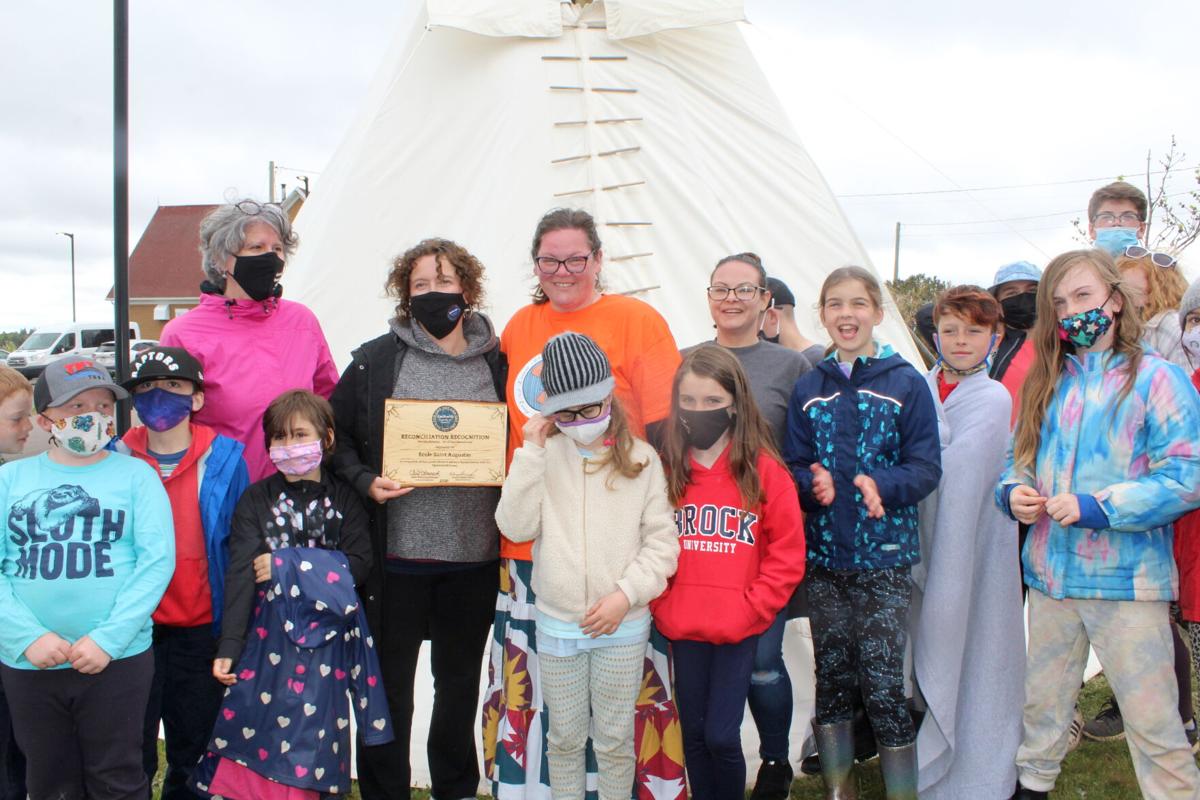 In recognition for their work toward reconciliation, École Saint Augustin was given an award by the Epikwet Assembly of Councils. Teacher Julie Gagnon said receiving the award was both an honour and a privilege, but they’re not doing this to be recognized, or be in the spotlight. Their main goal is to create a relationship with the community, and theirs is a journey in Truth and Reconciliation. Jillian Trainor photo

For Jamie Thomas, a group of students from Rustico’s École Saint Augustin visiting Lennox Island First Nation wasn’t just an event to check off a box for a list of things to do. This was a true effort in reconciliation.

“The kids are involved, they’re part of learning, they’re asking questions, it’s hands on,” said the director of culture and tourism for Lennox Island First Nation. “It’s meaningful in the sense that they’re going to leave with something that they will remember for the rest of their lives. I think what we have to remember when it comes to reconciliation is that it’s not something that happens overnight, it’s an extensive process, and this just highlights the importance of doing things like this so that we can create reconciliation with other people from across the country and other nations.”

This is the second event between the community and the school in a partnership between the two groups. In April, members of Lennox Island First Nation visited École Saint Augustin where students built miniature teepees, and built their own talking sticks while learning more about the Mi’kmaq culture.

At Lennox Island, students entered the makeshift lodge where a sacred fire burned, honouring the 215 children found on the site of the BC residential school. With the help of Elder Mathilda Knockwood Snache, each student gave an offering of tobacco and prayers from the heart, with a smudging ceremony taking place shortly after.

Following this, the students cooked bannock inside a teepee, though Elder Knockwood Snache gently reminded students that the Mi’kmaq actually lived in wigwams. After the bannock was cooked and consumed, students were given a tour of the reserve, culminating in a visit to the Lennox Island Mi’kmaq Cultural Centre.

For many of the students, this was their first visit to Lennox Island, but it likely won’t be their last.

“I enjoyed today,” said Keira Dionne-Arsenault. “I loved every bit of it, the bread making, the smudging, and I’m so excited for more activities here.”

Students have also been learning about the connection between the Mi’kmaq and the Acadian people, particularly when it comes to the Acadian Expulsion of 1755.

“We had a good friendship, when the deportation happened, a lot of the families were deported, but some families had the chance to escape and hide with the Mi’kmaq, that’s why there’s still some Acadians on the Island,” explained Julie Gagnon, the Grade 5/6 teacher at École Saint Augustin. “We are two minorities on the Island that have got a story, and the students need to know that. You need to know what happened in the past for a better understanding of the present, and to see where we want to go in the future, which direction.”

Ms Gagnon said the direction the school will be going in is one of collaboration with the Mi’kmaq to learn from each other, and this is something that will be going on for years to come.

In recognition for their work toward reconciliation, the school was given an award by the Epikwet Assembly of Councils.

Ms Gagnon said receiving the award was both an honour and a privilege.

“We’re not doing this to be recognized, or to be in the spotlight, that’s not our main goal,” she said. “Our main goal is to create a relationship with the community. It’s a journey in Truth and Reconciliation. To receive this was an honour, but it tells us with that tragedy that just happened, there’s still more to do, and we’re not done.”

One question that arose following the discovery of the bodies of those 215 children is how it will impact reconciliation.

Ms Thomas said it’s important this discovery was made.

“A lot of people don’t necessarily understand the history of residential schools. In some cases, we hear people say ‘It’s time to get over it’ but it’s so real, and it’s so raw, and it’s something that is not going to go away. We definitely feel like there will be other discoveries, so this is just the start. We had a circle yesterday, and one of the girls in the circle said ‘I was only six years old when that (last) residential school closed’. That’s a gripping reality when you put it into perspective like that. It’s a scary thing.”

While the tragedy of that discovery was observed by the students and the community, the visit ended on very high note with a surprise presentation. Gabriel Gallant-Loo, one of the visiting students, had found an eagle feather. Knowing the eagle’s significance to the Mi’kmaq, he presented it to Ms Thomas.

“It really touched my heart, and I was just blown away. It was absolutely wonderful,” she said. “I think it shows a level of respect when it comes to the work that we’re doing, and seeing it from a child’s perspective makes it more meaningful, and makes it so much more validating.”